A Chinese farmer is branching out Buddha-shaped baby pears!

Advertisment
Yup! You read that correct. There is a farmer named as Gao Xianzhang who has an orchard in the village of Hexia, in northern China, is turning fiction into reality by figured out how to create what some might call the holiest fruits ever - pears molded as infant Buddha. He took six years to perfecting himself on developing a special procedure to grow pears in that shape.

Some of you might be thinking that the photographs have been digitally manipulated to make ordinary pears appear to be a baby or Buddha shaped. However, the images are in fact genuine and depict to real entities.


The baby pears grow inside a transparent Buddha-shaped mould, and are plucked from the tree in a shape of cute little Buddha. From the top of the figure's head extents the fruit's stem that the farmer has opted to leave connected, perhaps as a marker that this is in fact still a fruit. The ingenious Gao says the locals in his home village have been purchasing his Buddha pears when he picks them from the trees. Most of them think they are cute and that they carry good fortunes. 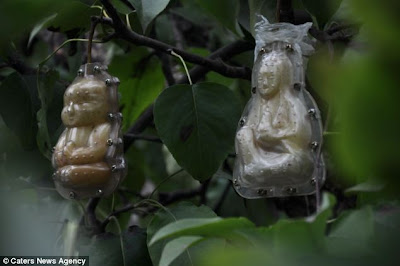 "People called me crazy. They said I was whimsical and it was impossible to grow baby-shaped fruits. They told me to stop wasting my time and money," said Gao, who has cultivated around 18,000 pears and sold them all for a hefty 50 yuan ($8) a Piece.


The thought of shaping pears first came to Gao around six years back, when he saw jelly molded into different forms at a supermarket.


This isn't the first variety fruit item to hit the bazaar. You may recall the craze that swept Japan as people shelled out hundreds of dollars for watermelons shaped like squares, hearts, pyramids and even faces.