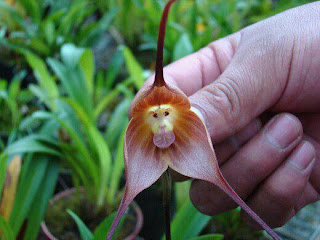 You need not to see the above picture quite painstakingly to find its similarity to a monkey face. This is a type of Orchid (a flower). Orchid is seemingly the most dazing and elegant group of flowering plant known to man. Orchids have adjusted to survive in various type of environments— rainforests, grasslands, bogs and mountains. No less than 35,000 species of orchid are presently populate the planet and the possibility of disclosure of the new unknown species is still anticipated.


The orchid shown in the picture is Dracula gigas (botanical name). There is another species of orchid called Dracula simia, that also look like monkey faces. The word “simian” in the name pays homage to the “monkey” likeness, and its resemblance to the long teeth and flowing cape of the Dracula character in prevalent fiction. 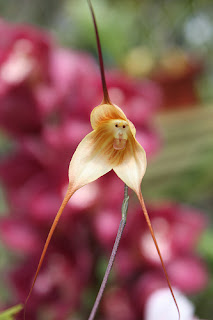 These species of orchid develops at the high rises in their natural state in Peruvian, Colombian and Ecuadorian forests are therefore not frequently encountered by people in the jungle. However, collectors have grew the plants somewhere else.